The project Consortium is composed by 7 partners:

UNINOVA (www.uninova.pt) is a private non-profit research institute based in Portugal, acting in the fields of robotics, electronics, micro/nano-electronics, optoelectronics, telecommunications, artificial intelligence, environment and vacuum and production technologies. Together with CNMT/I3, UNINOVA is an internationally recognized world pioneer for paper electronics, following the invention and public disclosure of the first in the world paper transistor, followed by paper memory and paper battery, which generated a strong resonance to the scientific world and in the media worldwide. UNINOVA participates in the BET-EU project through Centro de Excelecia de Microelectornica e Optoelectronica de Processos (CEMOP) which has the main activities related to the development of processes and production techniques related to micro/nano-electornics and optoelectornics fields.

The Institute for Nanostructures, Nanomodelling and Nanofabrication, I3N (www.novaid.fct.unl.pt) was founded in 2006 as a Portuguese Associate laboratory of 3 Hubs distributed along Setubal Peninsula, Aveiro and Minho region. I3N, one of the top 11 exceptional research institutes in Portugal, has as objective to advance discovery, innovation, development and deployment in a multidisciplinary area that involves mainly the nanotechnologies and the advanced functional materials for a broad range of crosscutting fields, to enhance the quality of life and to achieve sustained economic benefits.

I3N was internationally recognized mainly thanks to its disruptive activity related to development and processing of transparent electronics, smart chromogenic materials, paper electronics and energy integration.

The Fraunhofer Institute for Ceramic Technologies and Systems, Branch “Material Diagnostics” is focused on development and application of methods for high-resolution analysis of materials and devices. The institute is a recognized partner ofr industry, particularly silicon-based and organic electronics, but also for equipement suppliers.

VTT Technical Research Centre of Finland Ltd (www.vtt.fi) is the leading research and technology company in the Nordic countries. As an impartial non-profit Research and Technology Organisation and with the national mandate and mission to support economic competitiveness, societal development and innovation, VTT carries out research and innovation activities for the needs of industry and knowledge-based society. VTT is organised around three main areas: Knowledge intensive products and services, Smart industry and energy systems, and Solutions for natural resources and environment. However, all VTT activities are characterised by genuine trans-disciplinary and cross-sectorial approaches and the daily project work is planned and implemented within multi-year, coordinated programmes.

Sociedade Portuguesa de Inovação (spi.pt) is an international consultancy firm with offices in Europe, USA, China and Singapore. SPI´s mission is the management of projects that foster innovation and promote international opportunities. SPI is an associated member of the European Business & Innovation Centre Network and has a wide network of contacts with different kinds of R&D and Innovation actors across Europe and beyond. SPI is a certified training management company, with experience in needs analysis, implementation and evaluation of training implementation and support programmes. In addition, SPI is also certified in the management of R&D and innovation.

Politecnico Di Torino (POLITO) founded in 1906, is one of the most important universities in Europe for engineering and architecture studies, strongly committed to collaboration with industry. Currently, it holds the 47th position among the top Engineering universities in the world, the 13th in Europe and the 2nd in Italy (QS World University Rankings 2020). The range of studies is broad and ever-widening it spans space, environment and land, telecommunications, information, energy, mechanics, electronics, chemistry, etc. The Department of Applied Science and Technology (DISAT) involved in SYNERGY is focused on research and education involving the fundamental principles of matter and energy, with more than eighty years of experience on electrochemical storage systems.

Members of the Project Consortium 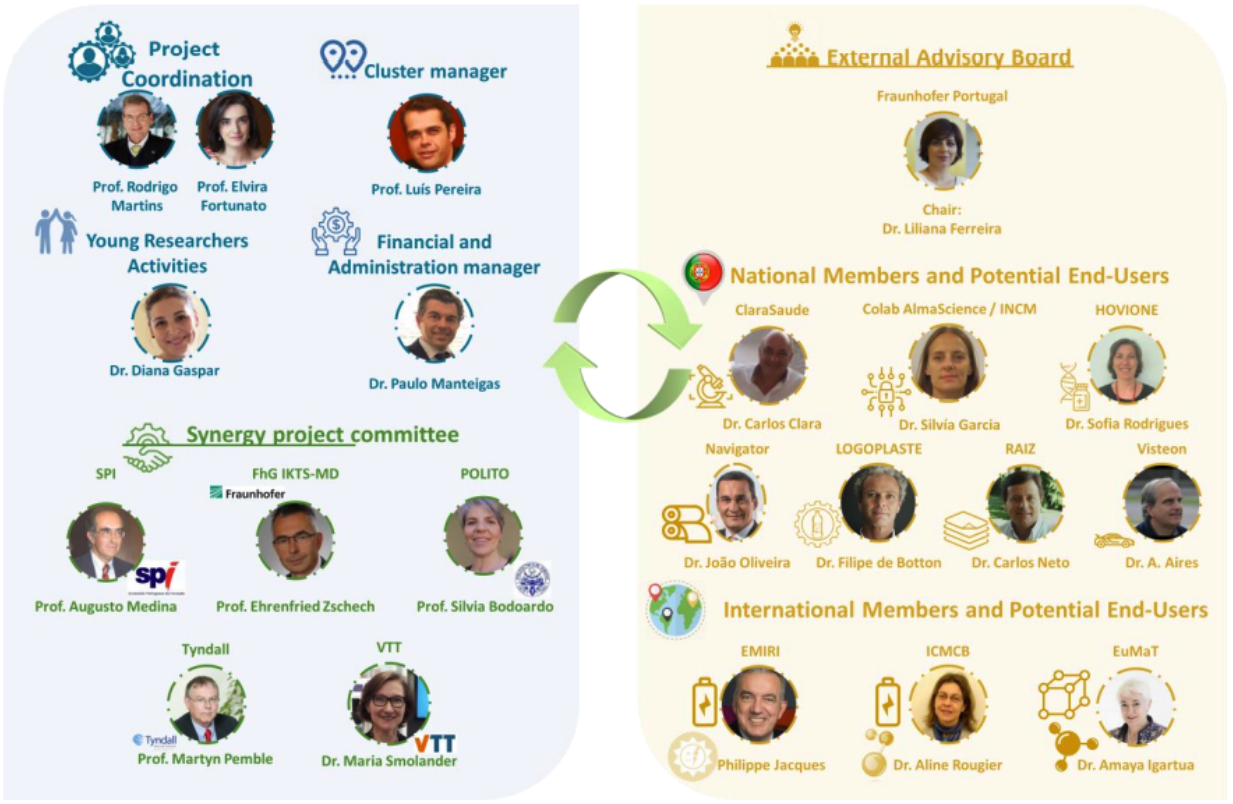 UNINOVA will manage all the activities under the coordination of Professor Rodrigo Martins that has a strong experience in coordinating projects and networks, together with Professor Elvira Fortunato, with strong experience in dealing with European matters (EC Scientific Advice Mechanism) as well at University level (vice-rector of Universidade Nova de Lisboa).

Professor Rodrigo Martins already coordinated 15 International projects and 19 national projects, besides holding 43 patents, together with Professor Elvira Fortunato. He coordinated the first project of semiconductor oxides (Multiflexioxides), considered by the EU as one of the 10 outstanding projects within FP6, as well as the past project BET-EU that was a success story. Moreover, among other prestigious positions, he is the current president of the European Academy of Science and the current first vice president of the International Union of Materials Research Societies, IUMRS. This puts him in an excellent position to access key members of the academy, science promoters and other relevant stakeholders for SYNERGY.

Professor Elvira Fortunato is the recipient of an Advanced Grant of the European Research Council, in the first edition (Invisible), and received a second one (DIGISMART), which started in January 2019. Most recently, in September 2020, she received the Horizon Impact Award 2020 from the European Commission, as a recognition of her work and consequent value for society. Additionally, Professor Elvira Fortunato has experience in coordinating several European and National projects, such as the gender equality project SPEAR (Supporting and Implementing Plans for Gender Equality in Academia and Research), of great relevance for gender equality issues that matter the University.

In September 2020 it won the Horizon Impact Award 2020 from the European Commission.

The consortium is constituted by six other partners. These include the twinning partners: FhG-IKTS (materials science and nano-anaytics; VTT (process upscaling), POLITO (electrochemical storage systems) and Tyndall (energy scavenging, batteries and photovoltaic technology). In addition, SPI from Portugal, is responsible for dissemination and the support to the implementation of training activities.

The coordinator is assisted by the project committee, the higher and final decision body of SYNERGY. It is composed of one representative from each of the partner institutions. In addition, the consortium is supported by an external advisory board, representing 28 institutions and companies that support SYNERGY (15 from Portugal and 13 from other European countries) representing different scientific areas and industrial sectors, comprehensively covering the scientific and technical scope of SYNERGY.

This website uses cookies to improve your experience while you navigate through the website. Out of these cookies, the cookies that are categorized as necessary are stored on your browser as they are essential for the working of basic functionalities of the website. We also use third-party cookies that help us analyze and understand how you use this website. These cookies will be stored in your browser only with your consent. You also have the option to opt-out of these cookies. But opting out of some of these cookies may have an effect on your browsing experience.
Necessary Always Enabled
Necessary cookies are absolutely essential for the website to function properly. This category only includes cookies that ensures basic functionalities and security features of the website. These cookies do not store any personal information.
Non-necessary
Any cookies that may not be particularly necessary for the website to function and is used specifically to collect user personal data via analytics, ads, other embedded contents are termed as non-necessary cookies. It is mandatory to procure user consent prior to running these cookies on your website.
SAVE & ACCEPT